In this research, a practical study was conducted to measure the temperature of objects remotely using a semiconductor laser and a heat-sensitive liquid crystals thermotropic material at different temperature values, starting from 30 ℃ to 70 ℃, at each value of the temperature the temperature is known To the bodies by reflected laser beams loaded with a portion of the measured body heat.

The final results showed that the best measurement of body temperature can be obtained at large distances such as 1, 1.5, 2 meters, as this is due to the fact that the scattered laser beams have less impact on the detector, and this is what was observed in the study when taking distances 1, 1.5 And 2 meters, where the graphs at these distances show good stability of the reflected laser beam loaded with a part of the heat to that point which reflex of it and whose temperature is to be known, which radiates heat perhaps more or less than other parts of the body.

As for less distances, the results obtained from this study lack accuracy, and this is what was shown by the graphs at a distance of 0.5 meter, This is due to the interference caused by the reflection and scattering of the laser light falling on the polarized plates and returning it to the detector 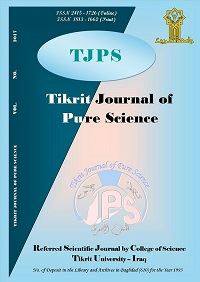